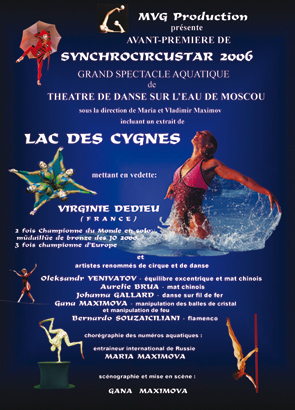 The idea of the project, in which the world stars of synchronized swimming and circus would gather each year after ending of the sports season (in the fall) to participate in a large aquatic themed performance, was born already in 2002. The sites for such performances should have been the Olympic swimming pools in various cities of the world.

The purpose of creating such a project was to promote water performances as possible solution for the professional realization of high-level athletes after finishing of sports. To solve this problem, the project framework envisaged, in addition to the performance show, a three-day training “artistic development workshops”, in which the aquatic sports athletes could get the basics of the disciplines required for participation in aquatic performances — artistic swimming, dance, circus and theatrical skills.

In 2004, the idea of the project acquired real shape — the first performance was scheduled for the autumn of 2005. Among the first to have been invited to take part in the performance “Swan Lake” as part of the international project “Synchrocircustar” were our Olympic champions Maria Kisseleva and Olga Brusnikina. The great interest in the project and subsequent participation of M. Kisseleva therein gave the hope that the main parts in the performance to music by P. I. Tchaikovsky “Swan Lake”, which is truly the pride of the national culture, would be performed by the absolute world leaders of synchronized swimming — the Russian athletes. However, the independent project of M. Kisseleva and O. Brusnikina with participation of synchronized swimming stars held a few months later at the pool “Olympic” made the project “Synchrocircustar 2005″ unfeasible in the form in which it had been planned, and its premiere was moved to 2006.

In April 2006 the French city of St-Cyprien with the support of the City Hall and the city sports club hosted the performance “Swan Lake,” in which the main part — the white swan (Odette) was performed by a 3-time world champion in synchronized swimming Virginie Dedieu, and the part of the Prince — by a professional flamenco dancer Bernardo de Barros Goncalves. In other parts were involved various circus artists: an eccentric balancer Olexandre Yenivatov, a gymnast on a vertical mast Aurelie Brua, a wire dancer Johanna Gallard, a juggler with acrylic balls and fire Gana Maximova and “Teatr na Vode” artistes: Maria Nikitushkina, Anastasia Sukhova, Julia Levashova, Julia Nazarenko, Victoria and Eugene Lyasnikovs, Natalie Thomsen, Catherine Surgucheva.

Choreography of the aquatic compositions was implemented by Maria Maximova, direction, music and stage design of the performance — by Gana Maximova.